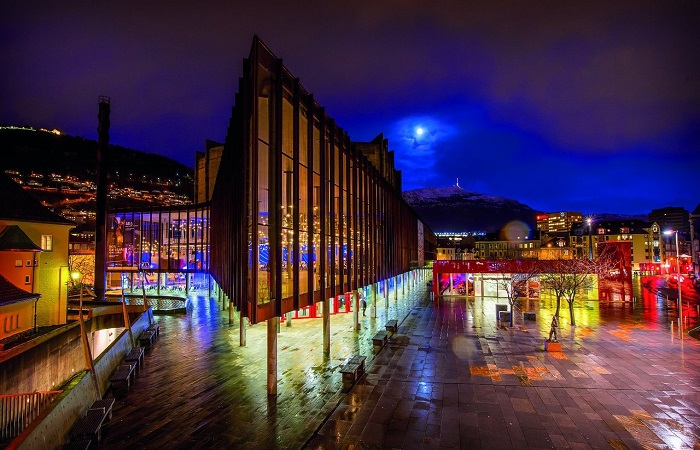 Consider it a warning, when ushers offer earplugs at the beginning of a classical music concert. A quick glance around the Grieg Performance Hall revealed what was to come. More than a dozen tympani lined the back of the orchestra on stage, and sets of music stands were arranged to the sides of the audience rows, where two of the four off-stage brass bands were poised to fire up the apocalypse, when that time came.

The Grande Messe des Morts (1837) by Hector Berlioz is no ordinary undertaking. The work, a Requiem Mass, commemorates those who gave their lives for the Second French Revolution (1830), otherwise known as “Three Glorious Days,” when the French unseated their king and replaced him with another, more liberal one. Those familiar with Victor Hugo’s Les Misérables will understand the time.

A fascinating element is that Berlioz was agnostic, and once stated, “I believe nothing.” Nevertheless, he set the liturgical text (on commission) with enthusiasm, and in doing so he created a revolutionary work of his own.

“Berlioz strives for the impossible in music. He strives for gestures that had never been heard before, and perhaps haven’t been heard since. The result is intoxicating.”

The performance requires an enormous ensemble, including a full orchestra with an unprecedented number of wind instruments, and an enormous choir. Directing the Bergen Philharmonic Orchestra, three combined choirs, and the off-stage brass, Maestro Gardner delivered a riveting performance.

The effort and enthusiasm behind the production was palpable, leaving me convinced of its triumph, and its relevance to the festival theme of “Faith and Doubt.”

More than a dramatic effect, when the choir moved to the front of the stage during the brass fanfare of the Tuba mirum section, it was easy to feel a personal connection with them; their voices and their individual faces, equally in light and shadow, revealed the poignancy of the human experience.

The brass bands signaled the fiery “day of reckoning” from their positions around the hall. It was a grand awakening. But the unison entrance of eleven timpanists is what ignited a tingling vibration in the soles of my feet that slowly rose through my body and into my head. Not at all deafening, the sound was fully alive and captivating.

One need not be religious to know reckoning and judgement. Berlioz’s embrace of the liturgical text may have had more to do with his faith in the French people, and their revolutionary cause. What uprising could not claim these words against an oppressor?

That day is one of weeping,
on which shall rise again from the ashes
the guilty man, to be judged.

Nothing will remain unavenged.

With tremendous introspection, Berlioz cast a solo tenor voice to represent the soul of the individual. Bror Magnus Tødenes sang the part with tenderness.

And finally, an etherial ending that faded into silence. As a veteran of many musical experiences, on and off stage, it is significant to say this performance touched me deeply. In the end, I felt a strong surge of emotions, the source of which was beyond words.