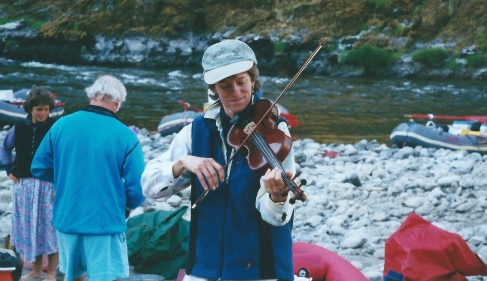 It was good fortune to fall into the company of musicians and boatmen, for it led to a decade of summers rafting the wild and scenic Rogue and Klamath rivers, where I used my formal music training to escape civilization. 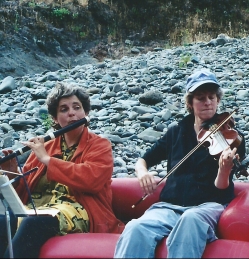 Performing in duos or trios, with violin, cello, or flute, we played music on the beach while our guests awakened to morning coffee. During the day we paddled and learned to read the water, mostly avoiding its perils. In the evening, on the riverbank, we chopped vegetables for dinner, helped new campers set up their tents, and performed traditional Irish tunes, Bach sonatas, or a sea chantey that all could sing. When the sun dipped below the horizon, we played from memory.

No experience has yet paralleled the weaving of melodies around the music of water.

Mountains of music swell in the rivers,
hills of music billow in the creeks, and
meadows of music murmur in the rills that ripple over the rocks.
Altogether it is a symphony of multitudinous melodies.
All this is the music of waters.
– John Wesley Powell, 1895

It is said that a traditional boatman (that is, a sailor of tall ships) was selected for what he could bring to the overall voyage. He would be strong and courageous, a rigging expert and a cook or a carpenter – but could he also play the fiddle or recite the poems of Robert Browning? These “extras” were essential to the morale of a crew that shipped off for months or years. Singing played an important role in the rhythm and coordination of daily work.

Our river journeys were completed in a number of days, and our guides were skilled boatmen who cooked delicious meals and told great stories. Some were also naturalists, who could point out the tiniest ecological miracle on a riverbank. John would whistle the perfect bird call back to the birds. A guest once surprised us by reciting Tennyson, while we huddled beneath a tarp on a very rainy day. Upon crossing a raging rapid, lead fiddler Shira, whom I credit for having brought all of us together, might throw her head back and sing:

It has now been almost as many years off the river as were spent on, and yet I still hear the lapping of water on the side of the raft, and the roar of Rainie Falls.

Chantey Sing: A Young, Hip Thing to Do 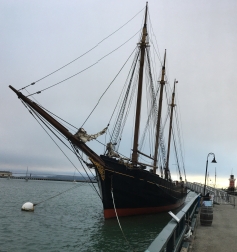 San Francisco is steeped in maritime history and the Marina waterfront has become a destination for those wanting to keep that legacy alive through song.

Chantey Sing, now in its 36th year, is a public singalong held aboard the ferryboat Eureka (1890) at the Hyde Street Pier. I discovered the event in a news article and wished to plug-in to some kind, any kind, of water music. To my surprise, an overflow crowd of 230 gathered on that August night for the same purpose.

Chantey attendees are of every age and description. Some youngsters came in costume.

Peter Kasin, a ranger for the National Park Service, has served as lead chanteyman since 1996. He is also a fiddler.

There has been an increase in young adult participants since Chantey Sing has appeared on YouTube, and Kasin observes, “it has become a young, hip thing to do.” Participants share an ethic that is serious and focused, but the mood is one of camaraderie and pure fun.

The evening was set in motion with “Away Rio,” a song that was traditionally used for weighing anchor at the beginning of a journey. This Rio Grande is in Brazil. 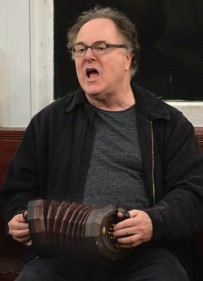 Others jumped in with “Roll the Old Chariot Along,” “Whiskey Johnny,” and “Blow Boys Blow.” A solo singer delivered a heartfelt “Bay of Biscay.”

Natural singing voices are perfect for the occasion, and singing is not required.

Kasin explains, “These songs tell such wonderful, dramatic stories about life at sea and on shore. They also speak for a lot of universal concepts, such as fear, loneliness, courage, romance, lust.”

The songs bring us together, and like the sea, they teach us about ourselves.

Chantey Sing is held at Hyde Street Pier in San Francisco on the first Saturday of each month, from 8pm to midnight, with a break at 9:00pm for those who want to leave early. The event is free but reservations are required; bring a mug for hot cider, and warm clothing: 415-561-7171 or email the organizers. 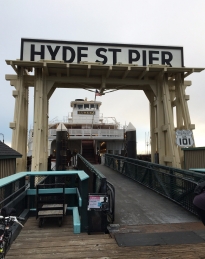 Also worthwhile are the Festival of the Sea and Sea Music Concert Series at Hyde Street Pier.