The full moon of May is known as the Flower Moon, named for the burgeoning wildflowers that emerge from April rain. It is a time of increasing fertility, and a time to summon into mind the inviolable rights, the wild rights or “wilderness” of humankind.

The Flower Moon in May 2017 coincided suitably with the birth centennial of composer Lou Harrison (1917–2003), a man keenly attuned to human wilderness, and that gave devotees  of art music a purpose to gather at the new Berkeley Art Museum and Pacific Film Archive on May 10th. The BAMPFA performance series, simply titled Full, brings music to the museum on the night of each full moon. The premise: Full will never leave you feeling empty.

Full promised and delivered a strong performance of Harrison’s Music for Violin with Various Instruments, European, Asian, and African, featuring violinist Kate Stenberg and, among other treats, an accompaniment of African thumb pianos (mbira).

But the music that captivated my thoughts into the following hours was an intrepid set of recitatives from Harrison’s Political Primer, rendered in sprechgesang by bass vocalist Richard Mix, with percussionist Ward Spangler on clock coils, ranch triangles, and amplified Geiger counter. 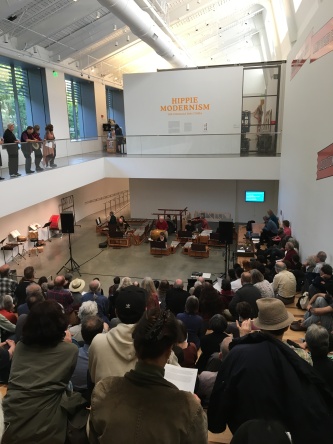 I have a comment to make: that by reason of being born,
the Four Inviolable Rights of Human Persons are to
air to breathe, water to drink, food to eat,
& his spirit to live, if he wish, all fresh and good.

These are Wild Rights, final rights; superior to
all constructions of civilization, of course;
& without knowing them none can know
that civilization is voluntary.

*[Harrison composed his Primer between the years 1936 and 1958, choosing to list the year of completion first.]

A native of Portland, Oregon, and then of San Francisco, California, Harrison lived by the motto “Cherish, Conserve, Consider, Create.” He was regarded as a maverick in his field, open to experimentation, invention, and the incorporation of all aspects of world music. I find it refreshing that Harrison grew to recognize the European classics as another form of “world” music, a point that is not far-reaching when considering, for example, Mozart’s 18th-century Austrian style enhanced by his fascination with Turkish Janissary music.

Harrison was fond of saying, “Enjoy hybrid music because that’s all there is.” He also counseled, “We’re all human beings, we have the same ears and we have the same feelings. There’s no ‘they’ anymore. We’re all ‘we.'”

[Quotes extracted from a 1999 NPR interview with Harrison, and from Harrison biographer Brett Campbell.]

The BAMPFA full moon series is included in the $12 museum admission fee. Attendees are allowed to wander the various floors and galleries, from which the performance can still be heard. Among the current exhibits is Erica Deeman’s Silhouettes, consisting of thirty images of women from the African diaspora. I was able to view these stunning photographs on an adjoining floor while listening to Oakland ensemble Gamelan Encinal  interpret Harrison’s Javanese-style compositions. 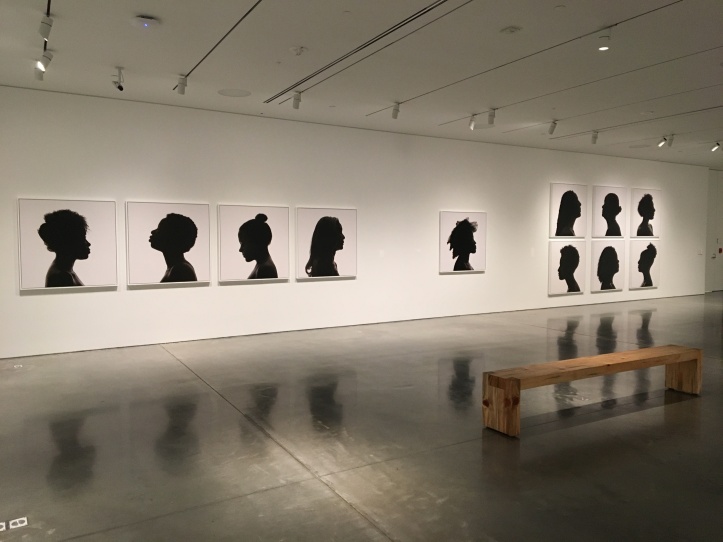 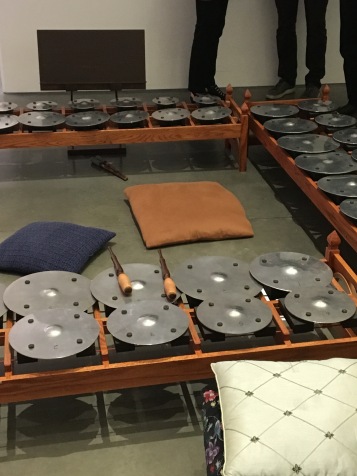 Indeed, have we other to do than to enjoy one another,
than to entertain one another, as one entertains an idea,
as nobly as possible, during our travels to death?

I have much enjoyed composing for you this Primer;
& now wish to each, true information & the courage
to live by the guidance of your mind.

I would like to thank Bay Area composer Robert Hughes, Lou Harrison’s longtime friend, colleague, and confidant, for generously sharing the complete text of Political Primer  with me – not only the segments performed on this concert, but the complete arias and recitatives as they were calligraphed by the composer’s hand. Hughes conducted the premiere of Political Primer in May of 1959. He and his wife Margaret Fisher currently publish music and video at Second Evening Art.

Appreciation also goes out to Bay Area pianist, writer, and producer Sarah Cahill for programming this event, and for all that she has done through the decades to champion new music. Video: Cahill on Lou Harrison’s Piano Concerto

The BAMPFA performance series will resume on the Strawberry Moon, June 9th, with a program titled Sun, a music + video performance depicting the rotation of the sun on its axis, accompanied by the sonification of observational data and cello improvisations. Don’t miss it.

Next: Temple of Remembrance