The Stuff of Memories

In less than 24 hours the thrill was gone. I had mistakenly taken up residence across from the Hungarian National Museum, a bustling neighborhood of bright lights, trams, and taxis, where life never sleeps.

Having traveled to Budapest often enough to easily navigate its culture and transportation system, I was disheartened. This visit was meant to inspire the stuff of new stories, but I found little potential until I passed a charming bistro down the avenue, whose enticing aromas awakened my nostalgia.

The smells drifting from their kitchen reminded me that I am in love with Hungarian goulash. Beyond its flavors, the aroma transports me back to a very special time, when I first visited this city in September 2001 with a very special quartet of musicians.

But plans to dine at the bistro were quickly overruled by the urgent need to move house. I chose a room across the Danube on the scenic Buda Castle hilltop. From there I could easily hop an eastbound bus to the Pest city center, and a southbound tram to the Müpa Festival Theater, and on this third night of the Budapest Spring Festival I was pleasantly amused to find my most nourishing meal of the day prepared onstage, at the circus.

“Come for the circus, stay for the banana bread”

The show Cuisine & Confessions reflects real life stories of the members of Les 7 Doigts de la Main [The Seven Fingers of the Hand], an international circus company based in Montreal including performers from Russia, Finland, Canada, USA, Sweden, and Argentina. Cuisine is storytelling through food, a stirring-up of tastes and smells with the intention of releasing memories deeply embedded in our consciousness. The performers combine ingredients on stage, and cook in an onstage oven. While completely captivated by their stories, we were immersed in the aroma of fresh banana bread. In the end, after taking us on an emotional journey of extremes, the performers would invite us to share the meal they had prepared during the show.

Members of the company, dressed in street clothes, were already moving about the stage and setting up their kitchen as their audience trickled into the hall. I found my seat and observed the action, when suddenly I felt a cold blast of water to the back of my head. I turned to find a mischievous acrobat [Sidney Iking Bateman] sitting a couple of rows behind me with a loaded water pistol. We exchanged a laugh before he moved on to his next target. As showtime drew near, the mood became one of a bustling restaurant at peak hour.

Another performer, wearing an apron and holding a salad bowl, called out from the stage, “Did anyone think to bring olives?” Others handed out candy, or threw things, like raw eggs and kitchen tools, to and from the stage, alternately thrilling and frightening the audience that had now filled every seat in the house. The comic prelude allowed us to interact with the cast before hearing their individual stories, but it could not have prepared us for what was about to unfold.

Breathtaking acrobatics, exquisite lighting, and a compelling soundtrack served to express the individual stories and food memories of each performer, in their native language: the struggle to break free of a dangerous, destined path, memories of a first love, and the search for personal identity and acceptance. Through food memories we were also reminded of the sweet taste of childhood, a chocolate kiss, and the feel of a summer breeze.

Matias Plaul performed a daring routine on the Chinese pole while recalling his father, who disappeared under political arrest in 1970’s Argentina. In closing, he asked, “If food is the ultimate expression of love, what was my father’s last meal, and who prepared it?” Food for the Senses

The Budapest Spring Festival presented two performances of Cuisine & Confessions, and both were the first among all festival offerings to sell out. It is a testament to what humans know they need—to be fed, in fact nourished, by a vicarious shedding of physical limitations (we become the acrobat as he leaps through impossible situations) and an acceptance of the uniquely personal recipe that defines us.

The visual beauty of this performance brought me to tears more than once, and many of the stories will forever remain in my thoughts. I admit to having a new awareness of my relationship with food, in particular, the foods that have nourished me since childhood, and continue to do so now. Founded in Montreal in 2002, the seven-member troupe has grown to include several casts [there are nine performers in this show] and is acclaimed to be one of the

most original companies of contemporary circus. Their name, The 7 Fingers of the Hand, is a pun on the French idiom that describes the fingers as different, and working differently, yet each can cooperate in perfect harmony toward a common goal. The company’s productions focus on the miracles and sorrows of everyday life, recognizing that “the special is always there in the everyday.”  Website: Les 7 Doigts 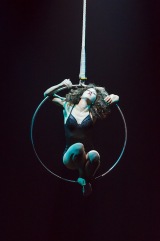